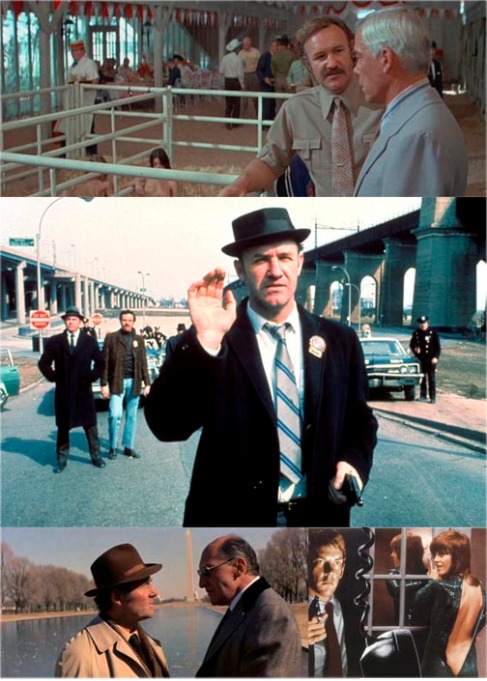 I was talking with a friend about how much we love the way that American movies from the 1970s look. We rattled off a few of the macho gritty films that we loved; The French Connection, Black Sunday, Klute,Prime Cut; as much to show off our knowledge as to make our point about a particular film aesthetic. The washed out colours, the use in genre pictures of the new wave hand held camera that would become so derigeur, the location shooting outside on the cold streets of whatever city they happened to be in at the time; Chicago, New York, Washington D.C. This is how I came to know and love America before I moved here. The overwhelming of the senses through big architecture, big emotion, big human interaction. All of this, as it turns out, artificial and created for the films that I watched – but I was not to know this at the time. I had not yet experienced the boredom of America, it’s long empty roads of meaninglessness. I had not experienced it’s tired citizens and it’s angry indecision. I was ignorant of the simmering cauldron of anger that boiled below the surface; acting as threat and fuel to all the fine people of this nation. Recollecting the manner in which I watched these films I realised that I had seen most of these works, not at the cinema, with pristine new prints, but late night on British television with the volume down so as not to wake the rest of the house on a tiny set with poor colour correction, little contrast and the glow from the tubes that gave any hope of showing the directors vision short shrift. My understanding of the aesthetic had been totally false, filtered, by chance and the limitations of 1980s technology, into washed out pastels that had never been the intention of the filmmakers. It was not an America that had ever supposed to exist or an America that, now with the advent of Blu-ray and online movie stores, would ever exist again. Yet, even now, I recall with nostalgia, the hunched shoulders of Popeye Doyle as he swaggers down the street to save America from Europe’s heroine barons, the relentless stride of Lee Marvin as he tries to save Sissy Spacek from Gene Hackman, the obsessional drive of Robert Shaw to stop a terrorist attack on a football stadium. It just makes me realise that what we want others to see is not necessarily the thing that they will see and what we ourselves observe can be filtered through any manner of myriad devices, experiences, dreams and nightmares. Will anyone say the same of Transformers: Dark of the Moon? I suspect not. Then my mind wanders to a deeper problem, beyond aesthetics and something that still exists, albeit in a more subtle way today. I was watching films where white men get things done, white men strive and fail; everyone else is a backdrop to their drama, their hopes and dreams. It is not the America I live in. It is not really an America that has ever existed. The America I live in is a kaleidoscope, shifting, pulsing and alive; archetype free with a story constantly in flux pushing relentlessly on into a future it knows, deep down, it has no control over. It is a country with no easy answers and absent heroes. That is why I love America. That is why America terrifies me.